We use cookies to enhance and personalise your experience. Please read our cookie policy to find out more about the cookies we use and how to disable them. By pressing “OK” or closing this banner, you agree to our

< Back to Sideways Glance

Put the surprise back into Christmas
morning and keep 'em guessing. 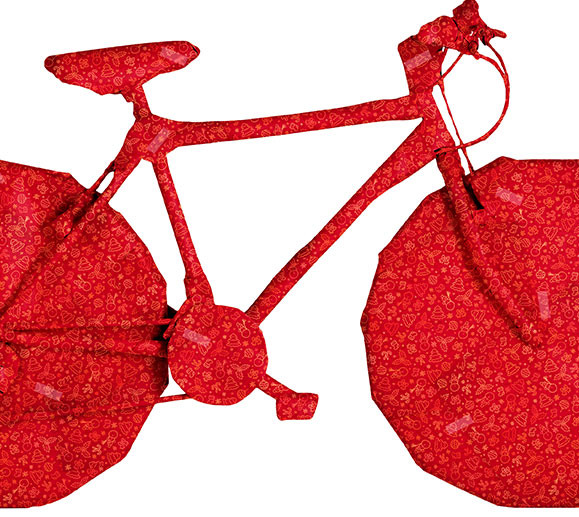 It's magical. The presents are placed under the Christmas tree, waiting to be opened by excited, expectant kids. But no matter how hard you try, how do you wrap the new kid's bikes so they don't look like bikes?
Christmas morning probably goes a bit like this...
‘Good morning darling, Happy Christmas here's your...'
'It's a bike isn't it!'...
'Yep, it is...'
The answer to wrapping these larger than life gifts and disguising their contents is called Decoy Wrapping!
To explain, a well-known high-street bike seller employed the services of master origamist, Mark Bolitho, to solve this problem. His solution involved the first layer of wrapping being quite basic, the second phase meant adding large origami heads and legs to form the decoy animal. So a chunky mountain bike becomes a prancing reindeer, clever eh! It'll add another level of excitement to Christmas morning, like that is needed!

What you need are extra large pieces of wrapping paper, tape strips together as required to form a large square.
Basic origami skills would be useful.